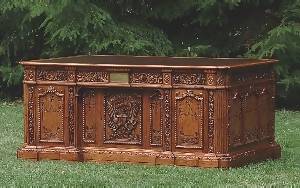 The history of The Presidents Desk (or as it is sometimes called The Resolute Desk) began in 1852 with the British Man of War ship, H.M.S. Resolute.

The ship was sent in search of Sir John Franklin and his party who had disappeared in the Arctic while trying to discover the Northwest Passage. Unfortunately, Resolute had to be abandoned in thick ice and its crew returned to England aboard another ship.

H.M.S. Resolute was discovered drifting in pack ice near Baffin Island by Capt. James Buddington of the US whaler George Henry in September of 1855. When the thaw set in he took her to his home port of New London, Connecticut, where, after the British Government waived all claim to her, the American Government bought her from the fortunate whalers for $40,000. She was refitted at the American Government`s expense in the Brooklyn Navy Yard with the intention of presenting her to Queen Victoria and the British people “on behalf of the people of the United States as a token of the friendly feelings by which our country is actuated.” 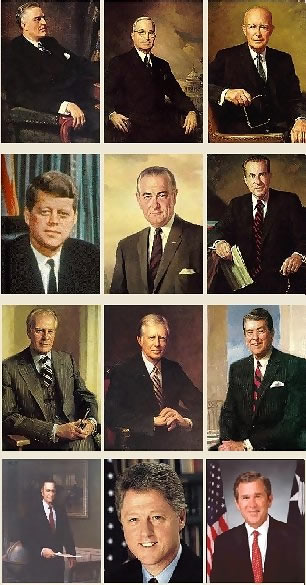 In 1879, when RESOLUTE was finally broken up, a desk was made from her timbers which was presented by Queen Victoria to President Rutherford B. Hayes. Apart from short spells, the desk has been in daily use in the White House by almost every President of the United States since then. On 15 February 1965 the British Prime Minister, Harold Wilson, presented President Lyndon B. Johnson with the bell from RESOLUTE.

President Franklin D. Roosevelt requested that the rear kneehole be fitted with a panel carved with the presidential coat of arms but he did not live to see it installed in 1945.

Following the Truman renovation of the White House (1948 – 1952), the desk was placed in the broadcast room on the ground floor where it was used by President Dwight D. Eisenhower during radio and television broadcasts.

It was first used in The Oval Office in 1961 at the request of President John F. Kennedy after his wife, Jackie, found the historic desk covered in a green cloth.

President Lyndon B. Johnson selected another desk for his office and the Resolute Desk was loaned to the Kennedy Library for a traveling exhibition from 1964 – 1965 and then was taken to the Smithsonian Institution for exhibit during 1966 and 1967. 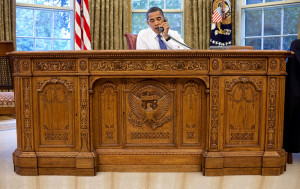 In January, 1977, President Jimmy Carter requested that the historic desk be returned to the White House for use, once again, in the Oval Office. In 1981, President Ronald Reagan also chose to use this desk in the Oval Office. President George Bush used it in the same office for five months in 1989 before having it moved to his Residence Office.

On January 20th, 1993, the Resolute Desk was returned to the Oval Office for use by President Clinton and is still used today by President Barack Obama.

A Member of the P.D. Group of Companies
Victoria, BC
Canada